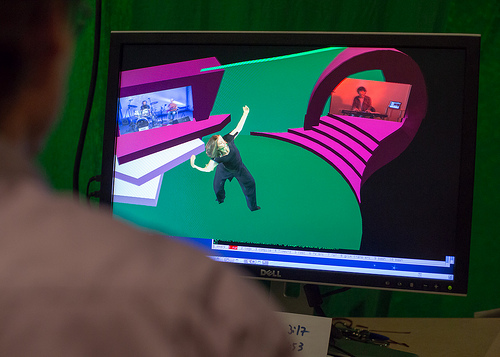 Grimage became the stage of a distributed musical performance, bringing together five artists from four locations across Europe. The show is the result of a joint effort between research teams in Barcelona, Poznan and Grenoble. The live transmission was streamed to Vilnius during the ICT2013 with all artists performing in real time, together, on a single virtual stage. Drummer and guitarist from Poznan (Poland), pianist from Barcelona (Spain), dancer from Grenoble (France) and lyrist from Vilnius (Lithuania).

The GrImage setup was used to reconstruct the dancer in real-time and merge video streams from Poznan, Barcelona and Grenoble into a single scene. The presentation showcases the potential of reconstruction platforms such as Grimage, which have widely acknowledged applications in arts that could be used in fields such as remote surgery and professional training.

Grimage acquired the new SONY HMZ-T1 a brand new Head Mounted Display which is truly immersive and offering High Definition 2D and 3D viewing with virtual 5.1 surround sound. Ideal for 3D movies and gaming, twin OLED screens deliver a high contrast image. This HMD will be used for displaying the 3D model of Grimage for the user in immersion into the platform. More informations about the HMZ-T1 ... .

Grimage took part on the 8th of March at the inauguration ceremony of the wing G of the INRIA building. A specific scenario has been made up for this event. Each one of the five VIPs had to push up a virtual button.This action launching a virtual reconstruction of the building rising up from the floor in 5 steps. This event was recorded in live by a cameraman and broadcasted for all the guests that couldn't enter the small virtualization room. ScreenShots of the VIP ... .

Grimage becomes Kinovis, a large environment for the visual perception of shapes in motion. Kinovis will have more cameras (50x5MP instead of the currents 8x1MP) but also depth cameras (TOF) and a larger acqusistion space of 15x7x3 m instead of the 1m radius current acquisition space. Kinovis will have as well 2 Head mounted displays, motion capture equipment ART and ViconImproved, a software interface : Kinodev and Millimetric static mesh capture : Arthtroscan. Slides about Kinovis ... .

Wednesday 9th of March 2011
GrImage opens its doors to VISIONAIR

Visionair is an international agreement that enable the European partners researchers to benefit from state-of-the-art technologies. The G-SCOP Laboratory, as leader of the project is coordinating the 25 international partners from 12 different countries. More informations ... .

Tuesday 5th of May 2009
GrImage at Siggraph 2009 Emerging Technologies

The full-body Grimage platform will be presented at Siggraph Emerging Technologies in New Orleans from the 3rd to the 7th of August. More information can be found here.

The GrImage platform in it's portable version was presented in Paris at the "Ville européenne de la science" (European science city) exposition that took place in Paris from Friday 14th to Sunday 16th of November.

The platform was presented in the Inria's "Digital village". At this occasion, we were filmed by the french TV channel TF1. Here is a link to the TV report.

The GrImage website has been updated. This update includes a lifting of the website's look and feel as well as the integration of a popup system for images. There were also some fixes concerning the images. The videos are now embedded within the pages for easier viewing.

Future updates will include :

Grimage and its sister platform built by the i-parla team were showcased at VRST 2008. Both platforms enabled two different users to meet in a common virtual space and share virtual objects. Click here to view the video.

The GrImage platform video at the ECCV 2008 conference. Application to telepresence. See the video

A small-scale GrImage patform has been built for external demos. It has been showcased at SIGGRAPH 2007 EMERGING TECHNOLOGIES, San Diego, from the 2 to 9 of August 2007. See the submission video.